The Hippodrome Theatre stood on Dovecot Street and was built in 1905. The original building burnt down in 1932 before being rebuilt and reopened in 1933. It ran primarily as a cinema before returning to live theatre use in 1948. In 1969 it was renamed the Essoldo Cinema, then the Classic in 1972. The building closed for good in 1996, being demolished and replaced by the Arc arts centre. 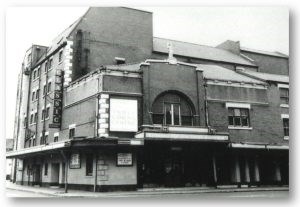 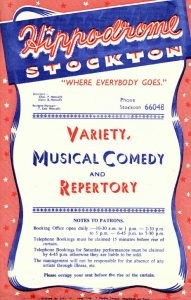 After a great deal of hard work from our volunteers we now have over two hundred programmes digitised and made available online. The majority of the collection comes from the 1950s and provides a tremendous insight into how the people of Stockton-on-Tees entertained themselves during the post-war period, and how regional repertory theatre operated. While some names remain familiar to modern day audiences – John Osbourne, Tennessee Williams, Terrance Rattigan, Agatha Christie – an almost forgotten period of light drama and comedy is documented here. Writers such as Warren Chetham-Strode, Gilbert Wakefield, Dorothy Brandon, Basil Thomas barely register, if at all, on a Google Search. Even successful playwrights of the period with Broadway hits to their name, such as Enid Bagnold whose The Chalk Garden was performed at the Hippodrome in 1959, are rarely performed or discussed. To enjoy a glimpse of cultural history when theatres vied for audiences’ attention with cinema before the arrival of mass television viewing, click here.