The Dutch style Town Hall was built by the Lord of the Manor, the 3rd Viscount Fauconberg and stands at what is probably the widest point on the High Street.

The new Town Hall was used as a courthouse and marketplace, it was built to replace the tollbooth which was demolished in 1710.

Yarm's position by the River Tees made it susceptible to flooding and in later years a bell was installed in the Town Hall that would be rung in times of flood or fire. The bell, dated 1690 was taken from the old tollbooth. It is inscribed with the words ‘Si Deus pro Nobis quis contra nos’ which means ‘If God is for us, who is against us’.

Plaques on Yarm Town Hall include one dedicated to local volunteers who served in the South African War 1899 – 1902, the five pioneers of the First Public Railway in the World (Stockton to Darlington Railway), and markers at various heights which indicate the levels of floods that have affected Yarm over the years. The highest marker, from 1771, is seven feet above ground. 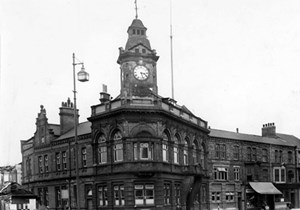