Before South Stockton became Thornaby-on-Tees, it decided to celebrate its independence by building a Town Hall.

The foundation stone was laid on 25th October 1890 by John Steel, Chairman of the South Stockton Local Board. The Town Hall was designed by James Garry and constructed by W.C Atkinson; it took two years to build. In 1892, the year that the Town Hall was completed, South Stockton and Old Thornaby merged into one to form the municipal borough of Thornaby-on-Tees.

The clock tower features Thornaby’s motto ‘Always Advancing’ and was donated by Alderman William Anderson. The clock was set in motion on January 27 1892. The interior boasted an impressive circular staircase with a domed, cupola window and tiled entrance hall. Extensions were made to the building in 1892 and 1940 though not to the same architectural grandeur.

Thornaby Borough Council ceased to exist in 1968 when Teesside was formed and the building fell out of use. This short-lived arrangement ended in 1974 when Thornaby became part of Stockton-on-Tees. In 2012, the Town Hall was sold back to Thornaby Town Council. It is a Grade 2 listed building. 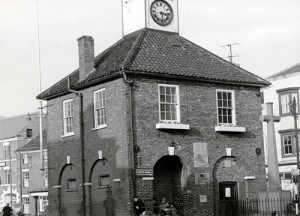