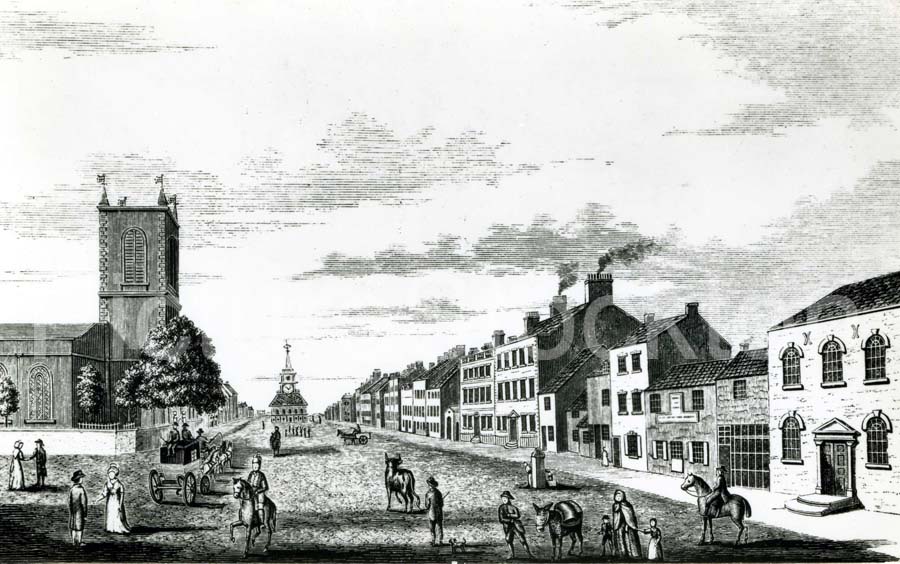 The Teesside Earthquake that shook the area just before 6am on 23rd January 2020 has caused a sensation in the local press and on social media, whilst even national TV has turned attention to seismic activity along the Tees. However, the 3.0 magnitude is not the first time the area has experienced earthquakes and there are several notable instances across the centuries of tremors in the north east, including accounts of activity less than a mile away from the Alberto Street epicentre of the recent disturbances.

A Newcastle Chronicle and Northern Counties Advertiser article on ‘English Earthquakes’ from October 1863, published in the wake of an earthquake a few days earlier, provided a potted history of earthquakes in the country going back to 1089. Amongst the tales of tremors was the account of an almost apocalyptic Tyneside in 1725 when ‘great earthquakes were felt in Newcastle, with dreadful thunder and lighting, with a blazing star, and a comet in the appearance of a great dragon, which terrified the people’.

Some 500 years later on 9th December 1780 a less dramatic tremor was reported in the north east and Yorkshire. The Scots Magazine reported how ‘shocks of an earthquake were felt in different places’ and described how in Leyburn ‘the generality of people felt themselves as if strongly lifted up, by a wave-like motion of the earth, and perfectly set down again’.

Last Saturday, about half past 4, a slight shock of an earthquake was felt here. The air at the time was remarkably still. It being market day, and a great hustle in the town in consequence, not many felt it in operation.

For those away from the hustle and bustle of market day, the effects were more apparent:

Those who were more retired say the houses, windows, chairs, tables &c. were thrown into violent agitation for about two seconds, attended during the time by a remarkable noise. From various parts of the neighbourhood of the town we have like intimation of its effects, but happily no hurt was done.

Unlike the vast Twitter trends, hashtags and Facebook posts about the 2020 earthquake, the spread of the news in 1780 was less dynamic with a solitary letter, dated 9th December, published in the press detailing the tremor in Yarm:
This Evening, about a Quarter before Five o’clock, sitting in an upper room, I very sensibly felt the Shock of an Earthquake. It continued, I think, about four seconds, and seemed to be what Pliny distinguishes by the tremulous or vibratory Kind. The Air, at the Time, was remarkably still, as it had been for some Days preceding this awful Motion of the Earth.

….at half past two there was a perfect calm. Suddenly, however, this death-like stillness was broken by a strange noise like the rumbling of heavily-laden waggons beneath the ground. The atmosphere immediately became illumined by a powerful white light, and objects at a great distance could be seen quite as distinctly as on a bright summer’s day. In the course of about a dozen seconds, the white light changed to a beautiful light blue; and gradually becoming darker, eventually faded entirely away. The illumination seemed to proceed from the north. It was accompanied by the rumbling noise already mentioned.

The recent rumbles on Teesside has seen almost instantaneous explanation of the earthquake by leading experts shared through newspapers, TV news and social media. In 1879, the reliable voices recollecting the ‘violent’ event were those of Police Sergeant Murphy, who was on duty at the time, and Police Inspector Parkinson who was standing near to Stockton’s Church Row Police office. The office shutters ‘rattled to a really alarming extent’, whilst a constable who was leaning against the wall surrounding the old St Thomas’ Parish Church described how ‘the wall trembled as though it were about to totter to the ground’. Other constables on duty nearby also felt the earthquake shock and confirmed seeing the ‘strange illumination’.

As well as the detailed Gazette report, the Hartlepool Northern Daily Mail reported the accounts of Stockton’s police but led with the more dubious headline of ‘SUPPOSED EARTHQUAKE AT STOCKTON’ and ended the report with one officer’s account of ‘quite a tremour of the ground.’