Number 7 Paradise Row was one of several properties once owned by Robert Christopher and he was probably resident in number 7 at the time of his death in 1819 2. Diagram 1 below shows the location of this street with what was number 7 highlighted in red. 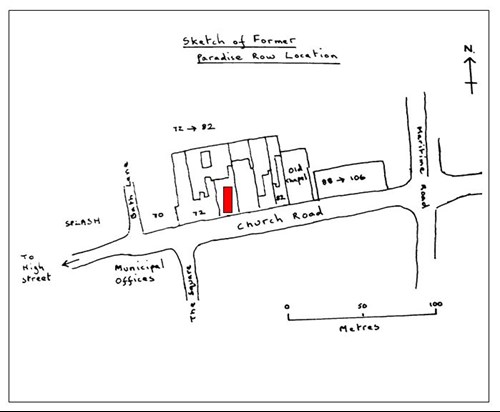 In 1832 following the death of his widow, Sarah, the house was advertised 9 for sale and described as follows:

A good family residence ….. with a garden, hot house, coach house, stable, paddock and other offices.
At the time of the 1911 Census 3 this property had 11 rooms according to the required Census criteria.

The advertisement (1832) also listed for sale a dwelling house in Silver Street.

Photograph 1 is a recent image of the house with some architectural annotations. While typically Georgian in style, like the other properties previously studied, this house has some noteworthy external features. It is worth repeating the comment made in article 5 that this house could be one of Douthwaite’s buildings as marked on Pattison’s map of 1722 E or that at least it is built on the same site. 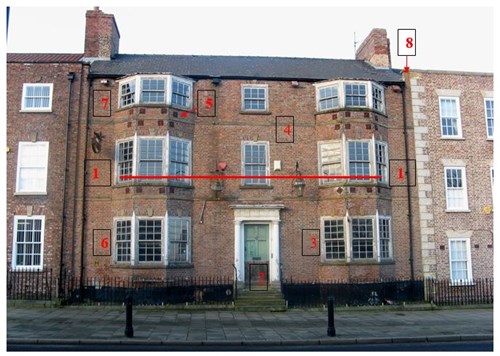 Note the 1774 London Building Act 10 consolidated a number of Acts all to do with aspects of buildings and fire safety following the Great Fire in 1666. In terms of dating a building it must be
remembered that often it took some time before everyone complied with any legislation and the farther away you travelled from London the less likely the compliance would be carried out
quickly, if at all. The Act required windows to be recessed and not flush or protruding (fire-prevention measure) . The 1709 Act 10 had required windows to have a sill of at least 4 inches.

7. Hand made bricks in Flemish bond like those in the Parish Church of St. Thomas

Quite a lot of information exists about Robert Christopher and some of this is covered in the earlier article about 5 Paradise Row. A full account of his life and activities is beyond the scope of this article and so the focus here will be limited to some of his work with some general background.

In 1795, Christopher published some local poetry of Joseph Ritson 11, though most of Ritson’s works were published in London. Sadly, it seems that having been friends and business acquaintances while in Stockton, the two had a disagreement after Ritson moved to London. Also in 1795, the government levied a duty on hair powder 9 and Robert Christopher collected this in Stockton as a sub-office of the Durham Stamp Office. Stamp duty had originally been levied on legal documents in1671 but was later applied to more items.

In 1796, Christopher published the first edition of Brewster’s “The Parochial History and Antiquities of Stockton upon Tees” C. In 1813 Christopher and Jennett produced and issued some coins or more correctly tokens….there was a national shortage of coins as a result of the Napoleonic Wars and the aim was to keep local trade operative. Who knows if this was pure altruism or partly self-interest? In any case, it was a short lived experiment (more details and images in Sowler A). Christopher and Jennett also produced various leaflets and tracts including religious ones. These were a feature of the period. In 1829 Thomas Jennett, Christopher’s former partner and successor published a lengthier second edition of Brewster’s book C. Jennett appears in a trade directory of 1827 8 with a Stockton High St. address. It is very possible that more examples of Christopher’s work exist, but they may be hard to find as they are probably not catalogued by the printer/publisher but rather by the title or author.

Born in 1750 2 Robert Christopher was a second son of William, a grandson of Robert and a great grandson of Richard Christopher. Richard Christopher had died in 1708. He may well have been born in Billingham and he married Margaret Wright in 1698 at Billingham (a second marriage?) before moving to Norton. Two of Richard’s sons were John and Robert. John who married Margaret Wilkinson was the father of Captain William Christopher (1735-1797) about whom a lot has been written by others elsewhere, including his supposed links with Captain James Cook and so will not be repeated here. John’s brother, Robert had married Frances Cooke in 1709 and his son William (baptised in1714 at Norton) farmed his own estate but his second son Robert took a different path as a bookseller etc. Bayley 1 states that Robert Christopher “died wealthy” and that “he made a large fortune by shipping and other speculations”. Robert Christopher’s will 7 included numerous legacies/trusts to relatives, including his first wife’s siblings, his own siblings, to charities and servants, running to several thousand pounds. As well as the amounts of money, Robert Christopher had several properties in Stockton and elsewhere, which he left to his second wife and her family, the Davidsons. In total, Robert Christopher’s estate may equate to several million pounds in today’s money. So how did he accumulate such wealth? Several times, his will refers to navy stocks and these may be the speculations that Bayley described. The Napoleonic Wars meant the government needed to borrow funds 12 so creating circumstances in which those who were prepared to take a risk were able to benefit enormously. A different line of thought, although I have found no evidence, may be that he inherited some wealth as a result of the death of his father William (1785) and his elder brother William (1770 with no issue) 2.

Land tax records (1759-1826 15) first list Robert Christopher in 1798 with one property in which he lived. By the time of his death he had 3 properties including his own residence of 7 Paradise Row.

Table 1 below, is a summary of the residents for each census 1841 to 1911. Note that “resident” does not necessarily mean owner. 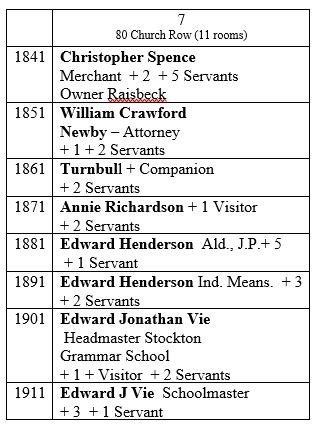 2. Most of the households had servants e.g. Annie Richardson 1871.

4. William Crawford Newby was in the legal profession

Newby and the legal profession is a well known combination both in Stockton and more widely on Teesside. Currently, operating as Newbys, their website lists 4 branches and their brief historical review goes back to Thomas Raisbeck in 1725 13. The Stockton office has a long association with Finkle Street. Newspaper reports 9 indicate that William Crawford Newby was working in partnership with William Bayley in 1839, probably having qualified a few years earlier. It is interesting to note that even in 1839 the sale of property involved the use of ‘spin’. A sale notice placed by Bayley and Newby refers to “the beautiful town and flourishing port of Stockton-upon-Tees” 9.

William Crawford Newby was born in 1808 at Witton-le-Wear 6 where his father was curate and a schoolmaster. He became an articled clerk with William Watson in 1825 14 at Barnard Castle, so he must have become qualified to practise as an Attorney/ Solicitor around the same time as his father was appointed vicar of St. Thomas, Stockton in 1831 9. William’s elder brother Mark and his younger brother George (died unmarried in 1839) both followed their father and had careers in the church and their sister had married the Rev. Henry Wardell in 1827 6. So William, in choosing the law, broke away from a family trend. The 1841 Census 3 lists William Crawford Newby as a Solicitor and shows him living at the vicarage in Church Row with his father, George, who became well respected during his 14 year tenure as vicar and for those with an interest, his life story might be a good research topic.

1845 to 1849 must have been a difficult period for William Crawford Newby as both of his parents died shortly after their move to the Rectory at Whickham. In the same period, William was involved with the legal case of Davidson v. Spence (1847). This story has already been noted in part 5 of this series about Paradise Row, so will not be repeated here. William Bayley’s son, William d’Oyly Bayley 1 writing in 1848, refers to the Bayley and Newby legal partnership and notes it was dissolved in 1846. An official notice about the dissolution of that partnership appeared across the press e.g. in the London Gazette in April 1846 9, but rather than the Davidson v. Spence case being a factor, it may simply have been that William Bayley chose to retire. Thereafter, William Newby worked alone and then for a longer time with Robert Richmond (formerly a Clerk at Bayley and Newby). The movement of Davidson to S. Africa in 1847 and the surprising death of Spence in August 1851 9 must have brought some relief, though probably of more significance for William was his marriage and his move into 7, Paradise Row.

William married Frances Newby (baptised 08th February, 1828 Bishop-Wearmouth 6) on 06th February, 1850 at St. Andrew’s Church, Newcastle 6. Research 9 suggests that William actually married a cousin, Frances, the daughter of Francis Newby, a brother of the Rev. George Newby. The 1851 Census 3 shows that William (Attorney) and his new wife were living in 7, Paradise Row with two servants. By 1861 3 the Newbys were living in 4, Paradise Row with 5 children, 5 servants and 2 visitors. The family remained at 4, Paradise Row into the 1880s 3 though they also had a property at Ouston Moor Farm, on the Sadberge Road. Unlike some other residents of Paradise Row, William Crawford Newby was not a major participant in public life. Apart from a brief spell as a councillor (1852), he was also Chairman of the Stockton School Board (1872) and a trustee of the Bluecoats School as well as the Bunting’s Charity 9. Unfortunately, this article has not the space to describe in detail how well he was regarded by Stocktonians. However, several newspapers 9 described his funeral (1884) at great length with lists of attendees and in one case there is a wonderful account of the man himself. Readers will, I am sure, find the account fascinating and well worth a read in full. As a taster, here are two short paraphrases: quietly he did good and blushed to find it fame (Alexander Pope) ….he was of a burly and imposing physique. Clearly, he must have found an appearance at Wolsingham Petty Sessions (1859) charged with trespass in search of game, a great embarrassment, even though he was discharged.

William Crawford Newby was apparently laid low by the effects of a bout of dysentery 9 from which he failed to recover fully. He died on 06th January, 1884 aged 77 2. His wife, Frances died shortly after on 16th March, aged 56 2. He is buried along with his wife and his daughter, Georgina Bicknell (1854-1883), in Norton Parish Churchyard 2. His son, George also a solicitor, replaced his father as partner with Watson in January 1884.
William’s will 7 was proved (by George Newby, executor) at Durham on the 20th February 1884 with a personal estate of more than £5,600 (probably currently equivalent to more than £560,000).

Photograph 2 below shows the Newby Family headstone in Norton St. Mary’s Churchyard. It is now difficult to read so a transcript, is given :

1. Online “GENEALOGICAL ADDITIONS TO THE HISTORY OF STOCKTON UPON TEES”  W.D.Bayley 1848

12. Online at Working Papers No. 95/06 Mercantilist Institutions for the Pursuit of Power with Profit. The Management of Britain’s National Debt, 1756-1815 Patrick Karl O’Brien