Percival William Murray was born in Newport, Wales, in 1896, to William Archibald and Leah Mary Murray. William Archibald Murray was a tobacconist and by 1901 the family, including their three sons, Archibald, Percival and Bruce, and one daughter Phyllis, were living in Musgrave Street, West Hartlepool.

By 1911 the family had grown with the addition of Leah Majorie, Keith Noel, and Cecil Ivan, and they were living at Front Street, Seaton Carew. By this time the family had two servants in their employ. 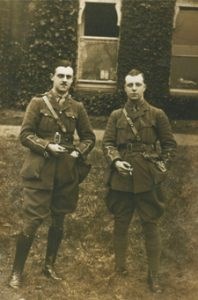 At the beginning of the war Percival William Murray was studying mechanical engineering at Armstrong College, Newcastle. During this time he attended the Officer Training Corps, and was gazetted to the 6th Battalion of the Durham Light Infantry, and fought with them during the fighting around Ypres. Percival applied to be transferred to the Royal Flying Corps, and in 1916 after training, he became a pilot and was stationed with 16th Squadron in Bruay in France.

On the 1st February 1917, Percival and his observer Lieutenant Duncan John McRae, who was Canadian, took off from the airfield on a photo reconnaissance flying a Royal Aircraft Factory BE2d. Their mission took them over the area of Vimy Ridge, at which point they encountered a German Halberstadt D.II of the Jasta 11 squadron flown by the infamous Baron Von Richthofen. The British aircraft was no match for the German and they were shot down in an area near Thelus, becoming the Baron’s 19th victims Both men survived the crash, but were severely injured and were captured by the German army.

Sadly both men died of the injuries the following day and are buried next to each other in Bois-Carre British Cemetery, Thelus, France.

At the time of his death Percival’s family were living at 10 Claremont Terrace, Norton. Percival’s name is remembered on the Roll of Honour in Stockton’s Parish Church, St. John’s, and also on the memorial in St. Mary’s Church, Norton.