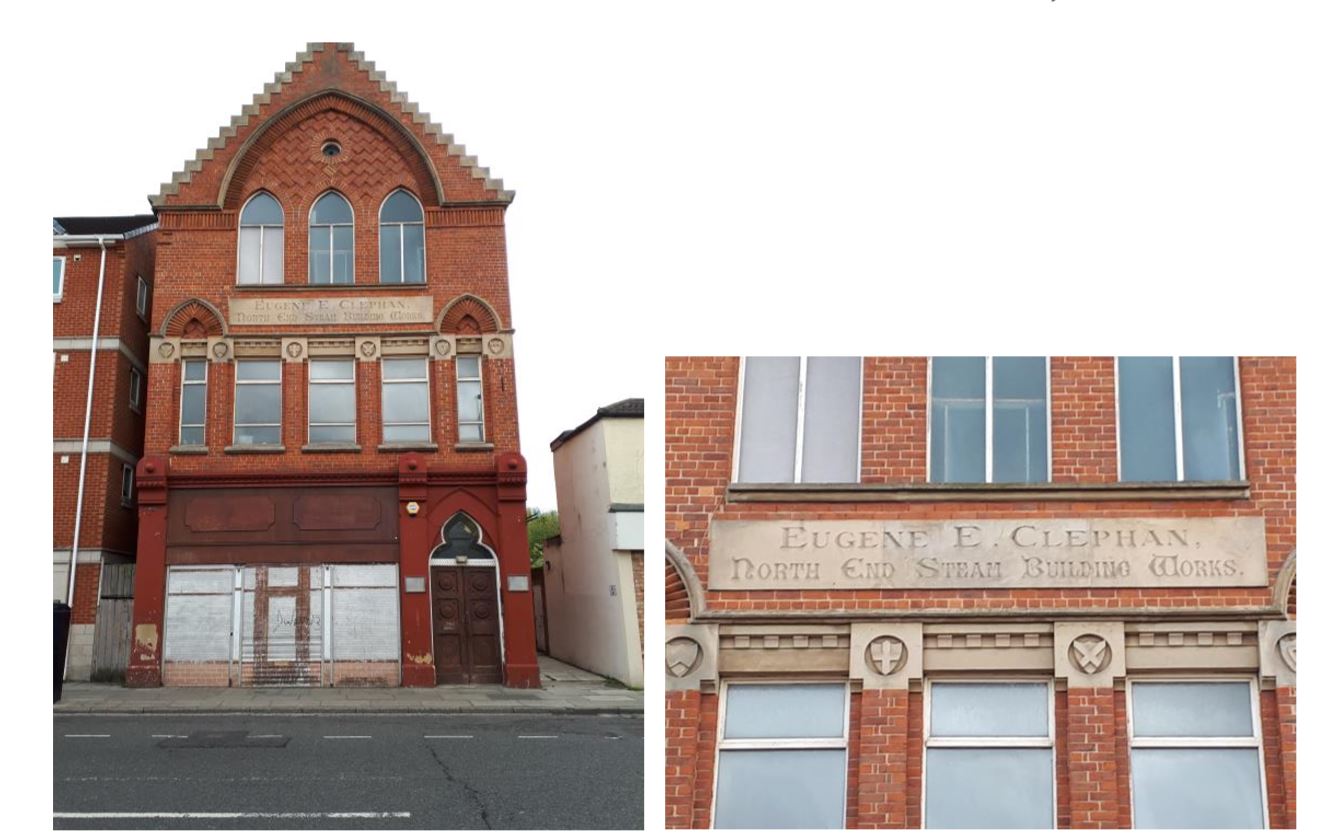 Transcript of an article in the South Durham and Cleveland Mercury, Saturday, June 16, 1877

The foundation of the establishment named as above was laid nearly half a century ago, and it has grown up to its present dimensions, large as we propose to show, with the characteristics usually accompanying slowness of growth – strength and stability. In the year 1832, Mr Wm. Clephan commenced business as a joiner in premises at the top of Regent-street, from whence, in 1840, he migrated to the locality of the present works. Purchasing from Mrs Ann Starkie a piece of garden ground at the back of the houses on the eastern side of Norton-road, he there built himself a workshop, extending the accommodation gradually for his increasing business as occasion required. It was not, as now, surrounded by streets. The position must have been quite rural, luxuriant with sylvan beauties; for shortly thereafter the people who built on an adjoining piece of ground called it Elysian-place. Elysian-place, alas! is now no more. The very name has perished – the buildings which formed it having been pulled down to make room for some of the extensions which have lately been made in the works under notice. Mr William Clephan was more than a mechanical joiner: he was an architect as well; and in the course of years came to be largely engaged in this capacity, in valuations, and otherwise as adviser in all that relates to the building trade. For many years previous to his death, which occurred in 1868, few men were better known in Stockton – none, we believe, more highly esteemed, his sterling honesty and uprightness, combined with an unpretending but real mastery of the arts to which he devoted himself, being qualities none too common, even in these days, in the town of Stockton.

On the death of Mr William Clephan, his son, Mr Eugene E. Clephan, succeeded to the business. Besides the training he received in his father’s workshops, Mr E. E. Clephan had the advantage of some years’ experience in London, during which he studied in the architectural department of the South Kensington Museum, and distinguished himself by winning a studentship and carrying off the Queen’s Prize. Under his care the business has continued to grow and prosper. By an exchange of land with the trustees of the Blue Coat School the premises had been greatly improved for their purpose. A purchase of additional ground from Mr William Nelson had also been effected, by which a frontage was obtained to the thoroughfare known as Thorpe-street. To his father’s staff of workmen – joiners, bricklayers and labourers – Mr E. E. Clephan added stonemasons, and subsequently plumbers. The plumbers’ shop, by the way, is the house formerly occupied by Mrs Starkie’s gardener, the only bit of old building about the place. The number of workmen in the older departments was also increased, the fresh energy of the new proprietor, and his ability, better cultured perhaps, increasing rapidly the work they were called upon to perform. It was not till 1875, however, that steam power was applied; and from that date the business may be said to have made a fresh departure.

The North End Steam Building Works are the largest of their kind in the county. In order to give some idea of the extent of the business carried on by Mr Clephan, we may state that last week he had nearly 200 men at work, and fifteen horses and carts conveying materials. Over and above the turnout of his establishment he does a great deal of personal work—as architect, valuer, &c. He is ready
to build a house, providing the plans, and doing every bit of it - except the slating and decorative painting - by his own workmen, in which case he charges nothing for his professional services as architect; or he will furnish designs for another builder, superintending the erection, and taking his commission like any other architect. He supplies mouldings to the trade, and has a folio book of patterns running to sixty pages. He has also given his attention to the construction of conservatories, vineries, and forcing houses for fruits and plants, many of which, in divers forms, he has put up. A book of designs he has had lithographed; and any one meditating an erection of the kind should forthwith consult it.